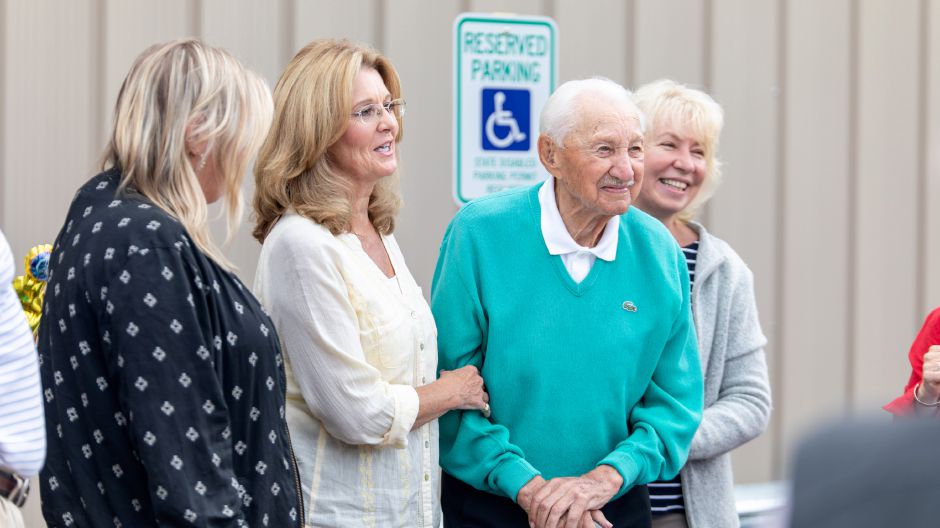 BERLIN — Despite retiring four years ago, Michael Budney celebrated his 107th birthday on Wednesday by showing up at  work just as he does every day.

Her father returns to Budney Industries each day to walk the floor and watch the process.

“It brings him back to when he was working in a machine shop years ago,” she said.

“He always told me it keeps him young,” said General Manager Mark Zarek. “It brings the spirit of the shop up.”

After singing Sto Lat, a Polish song wishing 100 years of good health, Lori Budney said they’d have to find a new song for him or change the words to wish him another 100 years.

“Everybody knows that he’s proud of his Polish heritage and (that) he likes to work,” she said. “I’m just happy my dad is healthy and (can) come here every day just for an hour or two.”

A lifelong aerospace worker, Michael Budney enjoys watching the parts take shape as they pass between stations, as well as getting to see all the familiar faces.

Before he blew out his candles, Michael Budney told the crowd gathered the celebration wasn’t about him, it was about all of those gathered.

“They don’t work for him, he works with them,” Lori Budney said.

Many of the workers were hired by Budney after he founded the New Park Drive aerospace manufacturer in 1983. He helped them and their families immigrate from Poland.

John Mazurek, an engineer with Pratt and Whitney who does business with Budney, said it always stood out to him how Michael Budney would work nights or weekends himself to make sure the needs of his customers were always met.

“Budney Industries is what runs through his blood,” Mazurek said.